The Women Writers' Festival yesterday had some inspiring sessions. Anu Aga stole the show, with Rashmi Shukla coming a close second. The session where social media influencers spoke and editors had a discussion were also eye opening. 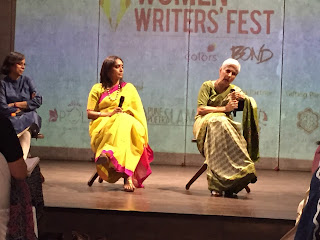 Anu Aga, who had headed Thermax, rightly pointed out that women don't show anger. In her time, the sole approved ambition of a woman was to 'marry and produce.' She talked about everyone in class had interesting ambitions, but 'when my turn came, I said I want to marry and produce, because that's the only thing I was told I could do.'

Anu spoke of work as being a means of self expression. When her father scolded her for contradicting her husband in public, her husband said that he had not married a 'rubber stamp.' He seemed to have been the wind beneath her wings.

That's how Anu, who hates math and still counts on her fingers, got the will to head Thermax after her husband passed away. Since you can't get 'apples from an orange tree,' she managed Thermax her way rather than trying to be a carbon copy of her husband.

'Never has a man brought me down,' she said, telling us of how a man she met at a dinner said 'Thermax was bound to turn around, because our prayers were with you.'


'Make shameless use of everyone.' We have a great support system in India- mothers-in-law, servants, etc.

Her mother-in-law couldn't understand her working, as she felt that only women who needed to work for financial reasons did so.

Although Anu was into social work in Mumbai and then socializing when she moved to Pune, her family approved of her working in Thermax. Her husband found her 'more interesting,' her children called her a 'better mother' as she 'nagged less!'

Anu's advice for women at work


Be yourself. Don't be aggressive towards other women, like she often sees is the case at the workplace.
Don't make gender an issue. If you're not promoted, don't jump to think that it's because a woman- that may or may not be the case. Even men feel disappointed when they're not promoted.

'Even in Parliament women don't follow the rules. Instead of raising their hand before asking a question they directly shoot a question and when the Speaker doesn't allow it, they say you never allow women to ask questions.'

Don't misuse laws for women. 'No one can rape you for years.'

Put boundaries at work. If you don't want a man to hug you at work, say no without escalating matters.

Take care of yourself, no one else will.

Learn to love yourself.

Husbands who say they work late to get their wives diamonds, should ask their wives whether they'd prefer quality time with husbands or diamonds.

The only difference between men and women is their plumbing.

Women often feel guilty then feel it's Ok to repeat their behaviour since they've done penance by feeling guilty.

It's nice that you covered all the quotable quotes by Anu Aga! Share with her. She'll be thrilled. And yes it's a blessing to be that vivacious at that age!
Here's my experience at the event in my words -