My mom wanted to buy a record player for many years. We have many old records- ghazals, Bengali songs, Jesus Christ Superstar, etc. When I searched ‘record player’ in Kolkata on Quikr, I was overjoyed to see that there was an HMV one with amplifier available. In fact, I had downloaded the Quikr app on my smartphone and searched for a record player on my way back from office.
I spoke with the seller on the phone to find out the cost. I was overjoyed to hear that it was for Rs.5000! I checked with mom whether that was OK with her. When she seemed interested, I set up a meeting with the dealer.
We took along a couple of records to make sure that the record player was in good working condition. After much explanation from the seller on where his office was located, we finally tracked him down. He led us to his office in a maze of lanes, which we would certainly not have been able to navigate without him.
After climbing a flight of stairs, we met our record player. He had also kept a record ready to play for us. I could have never imagined that its sound was so clear! Truly, the wheel has turned full circle. People say CDs have more clarity of sound, but the sound coming from those decades old records was even better.
The seller explained that in the US, vinyl is coming back in fashion. He also told us how we could look for wood glue to clean our old records, so that’s the next item on my shopping list. Meanwhile, we plan to use shampoo water to clean the dust that has settled in our records. He also explained that we should stack our records vertically, not horizontally, so that they don’t press on each other and bend.
The record player was fairly simple to operate. With the turn of a knob, it would get switched on. 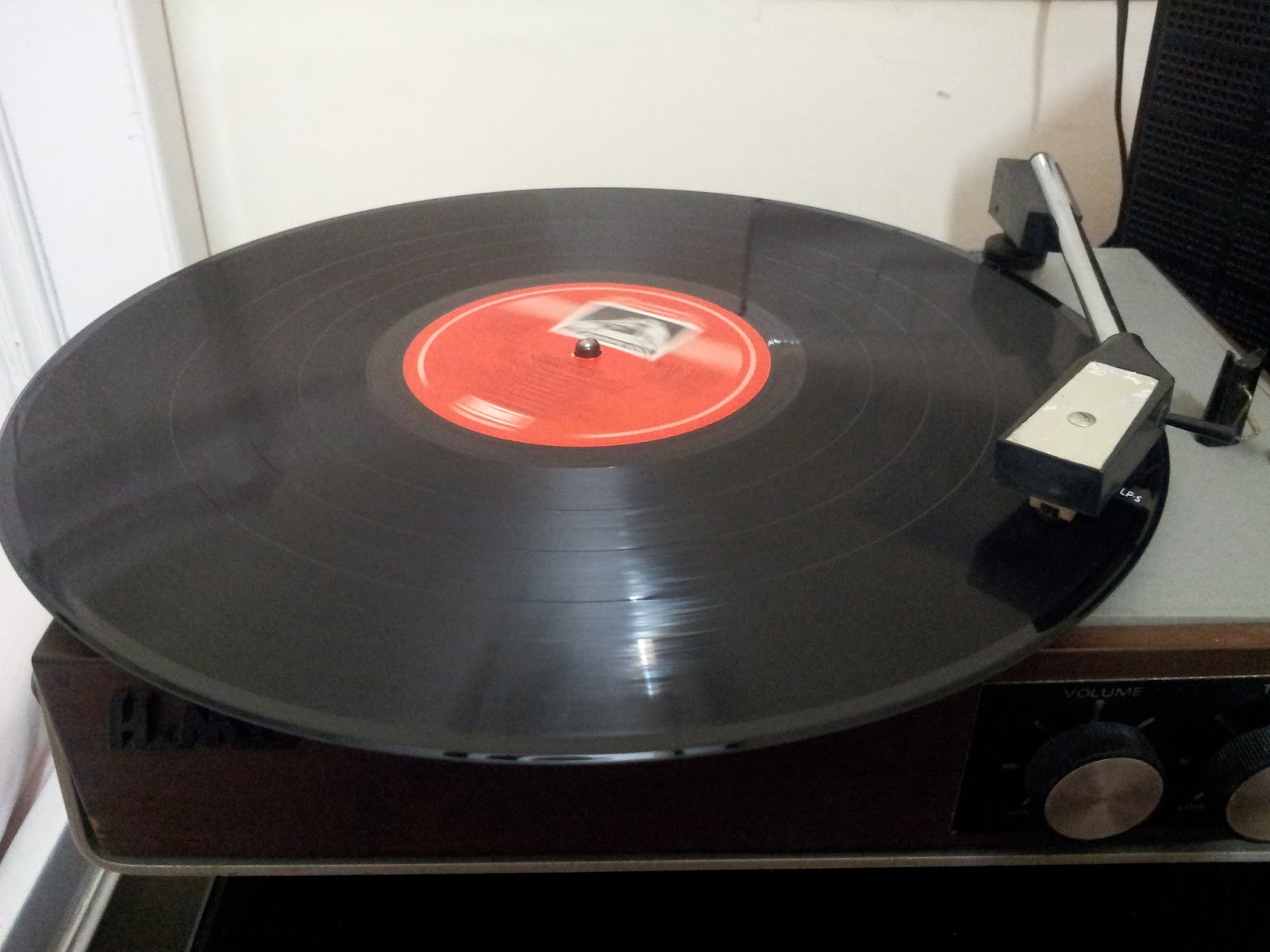 You could keep turning the knob to play with the tone. 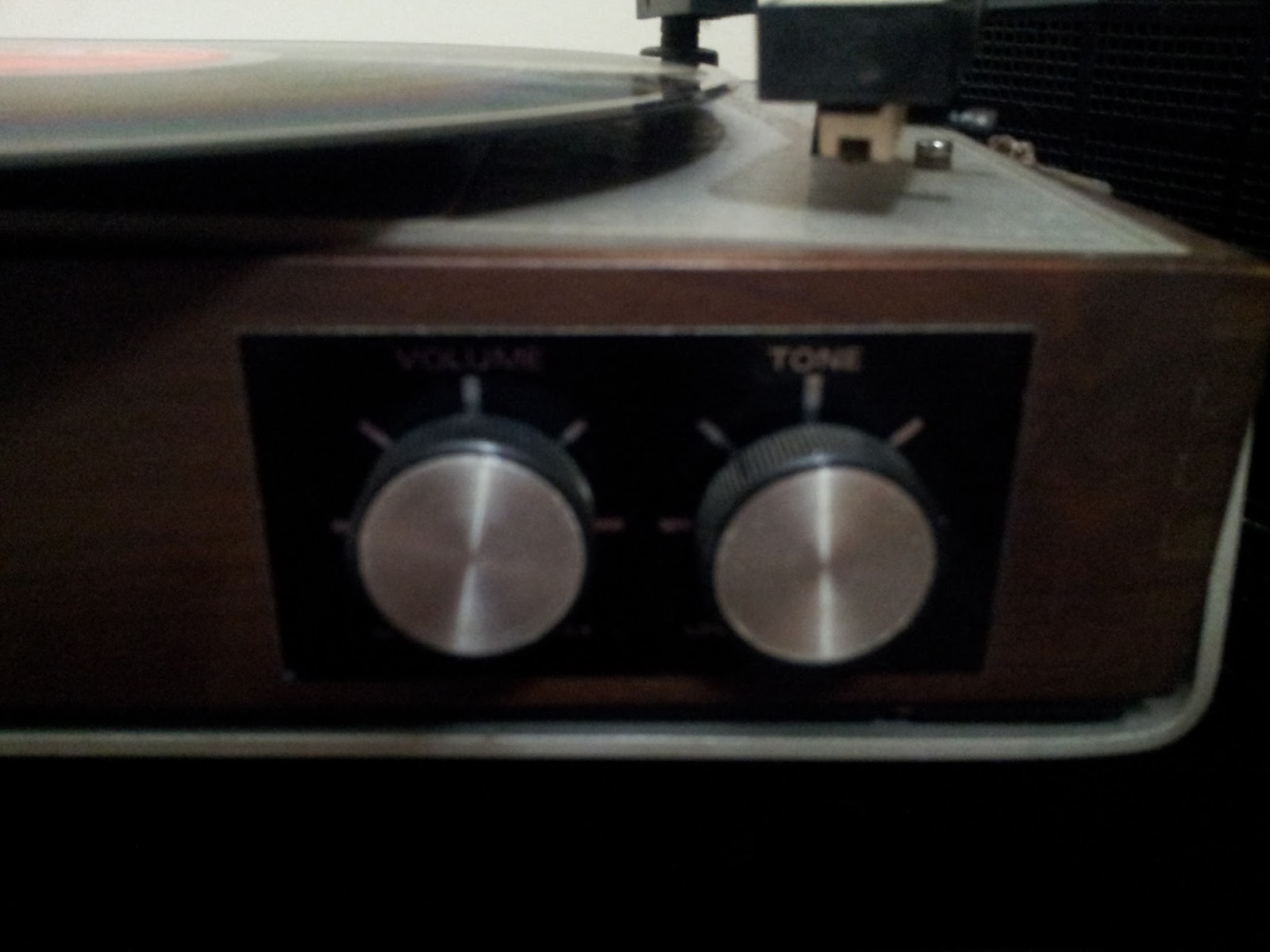 Next to it, on the left hand side, was another knob to control the volume. The amplifier made the sound coming from the player even more grand. 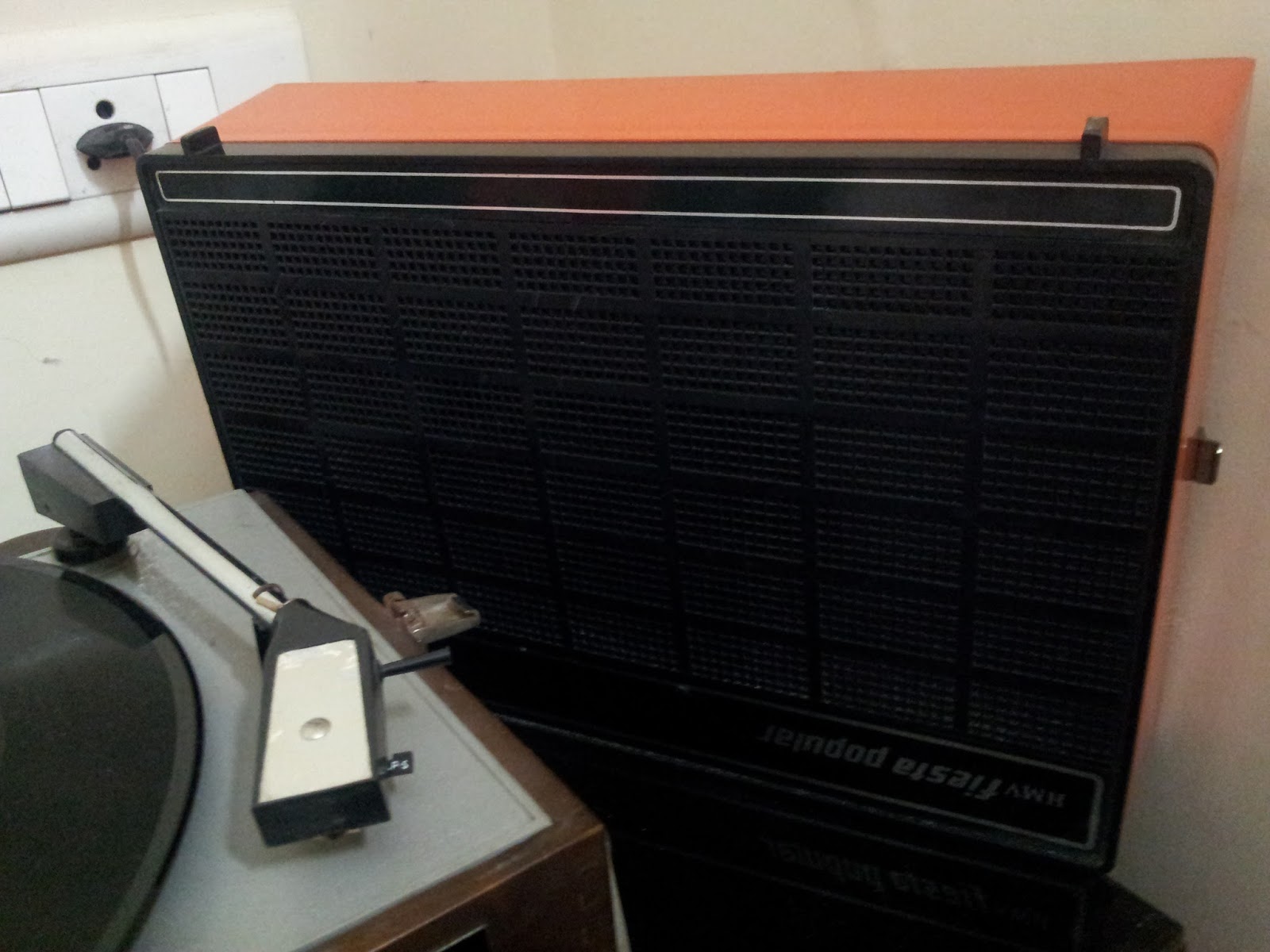 It used a simple two pin and was compact. Good, as our home is overflowing with stuff as it is!

The amplifier doubled up as a cover for the record player. We played our records too, learning the ropes of putting a record on, and switching it off. When we switched it off, the record would stop spinning. These CD players, ipods and what not have done a disservice to music by covering the mechanics of playing it.
The sound clarity of our records on the player was amazing too. One record seemed dusty, so the voice was unclear. Although we were unsure of how many of our records back home would be in playable condition, we still decided to go for the record player.
The record player can play records at 3 different speeds- 33 rpm, 43 rpm and 78 rpm. 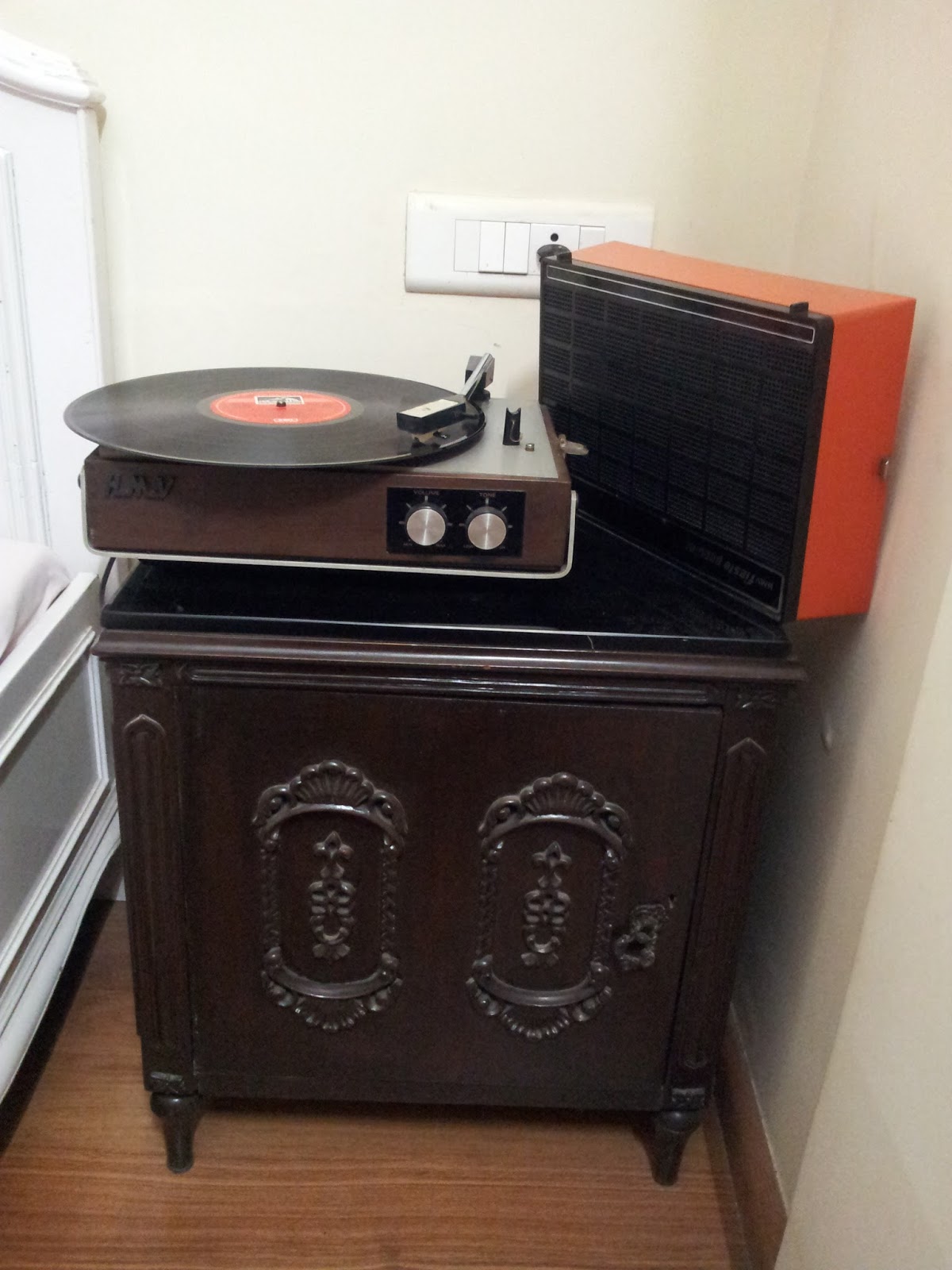 And in two sizes, big and small. The seller works on computers and data recovery, he said that he likes to listen to records late at night.

The seller explained that max to max we would have to replace the rubber pin in a while, once it wore out. He said that it would just cost Rs.10-15,and he would help us in getting the replacement part. He said that an Akai record player he had was for Rs.25,000 and generally record players start from Rs.50,000. Sounded good to hear then, with a bargain in front of us!
It just fit in our bag and we were careful to keep it horizontal on our way back. We decided to keep it in the bedroom. Mom practices her music there, so it seemed like the natural place for it. It does look happy!
Now I’m curious to know how a record player works. We may even order new records from the US for our dear new white elephant. Google informs me that Edison invented the phonograph, the grandfather of the record player.
Feels that there’s a piece of history in our bedroom now! When Papa came home, I immediately sent him into the bedroom to have a look at the newest member of our household. As the record turns, a stylus reads the groove.
The stylus has made a comeback with phones, so who knows, record players might become popular in India again, as we are so fond of aping the West. Anyway, to resume- the stylus reads the vibrations on the grooves of the record as it moves.
These are turned into electrical signals and carried to the amplifier by wires. The speakers turn these signals back into sound.
Only in Kolkata would you find a person wanting a record player, and a person selling a record player, methinks. It’s great that a years old wish could be fulfilled just by a few clicks on Quikr! HMV- His Master’s Voice will echo in our flat and give us many happy hours as we listen to great music while gazing at the lovely lake outside. If there is a paradise on earth, it is this, it is this, it is this…
Thanks to BlogAdda too!
"This post is a part of Quikr.com activity at BlogAdda.com " . 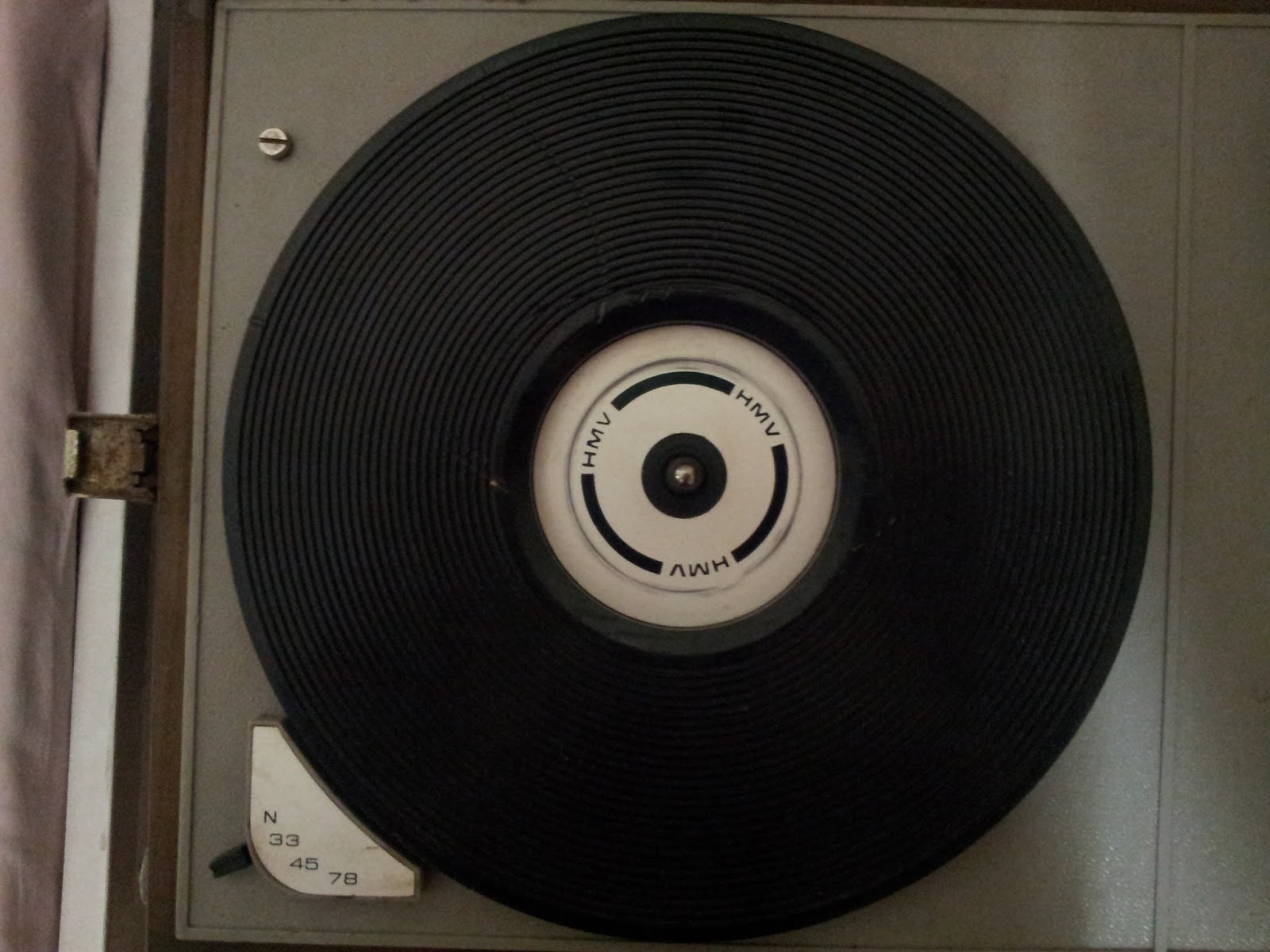