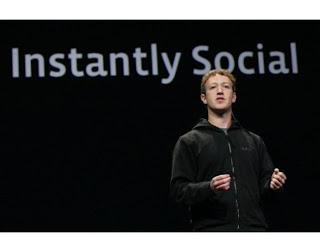 After watching The Social Network, I wanted to know more about Mark Zuckerberg. I went to Wikipedia, which factually more or less confirmed what was mentioned in the movie. I watched an interview of his on YouTube, in which he came across as very different from his movie persona.
As I was multi-tasking while listening to the interview, I stopped paying attention to what Mark Zuckerberg was saying after a while. A comment by the interviewer stayed with me though. He said that Facebook seemed to enroach on our privacy as a default, only stepping back and raising its hands when it was obvious that it had gone too far.
That seemed to check out with the movie's portrayal of Facebook's founder too. Sometimes I think that privacy on Facebook is oxymoronic. If we wanted privacy, we wouldn't be on Facebook. I think Facebook is breaking new ground because it is media that is personal and social. Unlike books, radio, TV, internet.
Maybe that's why we spend more time on it. It's our filter for other media. Will the collective consciousness improve? Will we know more, read better articles, watch more educational videos as they are shared by our more learned friends?
Or will we click on titillating links, treat Facebook like our personal idiot box? Will there be a mass dumbing down? We still don't know what Facebook is, can, or will be. It evolves constantly, and we evolve with it.
It is truly two way media. Often we find it's intuitive, easier to use. Another part of Mark Zuckerberg's interview stayed with me. This 27 year old asked high school kids what email they used.
They thought email's slow. I too find it cumbersome nowadays to type out a subject line and text. It's just easier to keep others in the loop by writing on one friend's wall on Facebook. I also watched some hilarious videos of Facebook in the offline world. People poking each other actually, writing on wall, and shouting out comments.
We write about the real world online. It's still funny to imagine the virtual world offline. Maybe one day it will be the other way round.
Posted by nutty at 11:05 AM 3 comments:

Facebook's not our Newspaper, it's our Ad 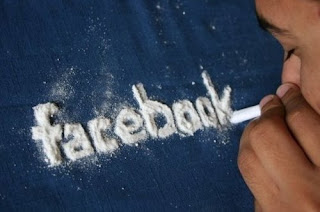 I'm often irritated when I see photos of happy friends at birthdays etc on Facebook. People don't seem to share the downs as much as the ups here. Although no one likes a wet blanket friendship does mean sharing the good with the bad.
Is Facebook making us more optimistic? I don't think so. Our editing skills are improving definitely. We may not be happier but by choosing to only share our high points we are projecting illusions. These are only part of the truth.
Would any purpose be served by status updates which moan, grumble, and seek reassurance? Maybe not. Facebook is not a personal newspaper, it is an advertisement. You don't objectively report the good, bad, and ugly in your life.
You try to sell your life to others and yourself. Look at the fun I'm having! See how wide I'm smiling! Rather than candid photography, it seems posed. A Polaroid which gets instant reactions. Ironically half the time the people who react to our updates are the ones to whom we are supposedly close.
The real conversations happen offline, where we share our desires, dreams, and fears. I too like posting happy updates. If I don't post one for a while I wonder whether my life has become unexciting.
But life is like that. Chronos lasts longer than kairos. We would get tired if we were cutting cakes, dancing, or climbing mountains all the time:) So let's not forget Facebook's our movie, offline's our reality to which we return when we finish watching pictures of others' lives.
Posted by nutty at 3:30 PM 5 comments: