It's a pain. Worse than waxing for us. Imagine having to take a razor everyday. If there are remnants, looking like Charlie Chaplin. What's the alternative?
Risking no snuggling because she doesn't want beard rash?
That gain's worth the pain :)

So, the usual's good enough- a drink and your lingerie. Maybe a pole dance to spice things up- if you don't die laughing :)

This post is a part of the 'Shave or Crave' movement in association with BlogAdda.com
Posted by nutty at 4:45 PM No comments:

This inspiring speech by Kavita Krishnan, Secretary of the All Indian Progressive Women's Association drove me to write on the rape. The anger is something we all feel, which we often need to suppress. Grin and bear it. Do a balancing act, until you don't know whether you are on your head or heels.
Wear certain clothes that don't reflect you, because of society. Keep mum, so as to not rock the boat. Where will all that anger go? Inside, poisoning oneself? I was avoiding reading about the rape case because it just plain scared me. 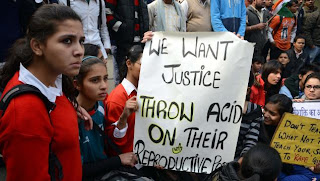 But we need to face our fears. It just can't be ignored. I'm happy that we are all channeling our anger in protest. I hope things change. I guess this is the first step.
Posted by nutty at 6:39 PM No comments:

Magnifique: Play- Celimene and the Cardinal

Stumbled upon a light, souffle like play. In French and very French. Luckily, with English subtitles :) Remembered a bit from the days I learnt French. Only the French can do a play on subjects as seemingly disparate as religion and love.

It's a sequel to Moliere's The Misanthrope, but the director Jacques Rampal has written it. Very witty with lines like- so now that your servant has quit, who's the replacement? asks the Cardinal.
Celimene replies, wiggling her fingers- I have ten!

Celimene is a feisty character, rarely getting cowed down by the Cardinal. An ex lover, he tries to browbeat her bees saal baad. He stumbles on a book of paintings of her done by her husband. He denounces them while looking through them :) Tauba Tauba types.

Celimene invents a confession to keep her husband from jail. The Cardinal is conscience stricken, realising that he is the greater sinner. He returns the book of her paintings to her and vows to go away to a desert island. 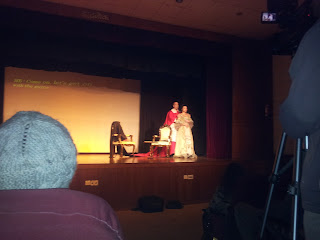 Realising that he still carries a torch for her, Celimene gives him the book of paintings. A wonderfully nuanced note. I want to read The Misanthrope now, or better still watch it. I coveted Celimene's outfit the moment I saw it. A bottle green with layers, flounces and ruffles enough to gladden Anne of Green Gables's heart. Gowns aren't that useful here, but a kurta...
Posted by nutty at 4:31 PM No comments: 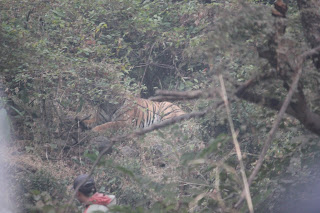 Tiger Tiger, burning bright- finally Blake's lines made sense. The danger was palpable. I thought the tiger's face would not have so much white. I decided to enjoy the sight rather than focus on clicking. T-24 then moved his jaw and spat some meat out. He then got up and sauntered off in the bush.

Third time lucky- I had decided I wouldn't go back to Ranthambore if I didn't see a tiger this time. It's too painful. This was the first time I went on two safaris consecutively. We drew a blank in the afternoon safari. We saw pugmarks, but the tiger remained elusive. Dancing peacocks and abby crocodiles were some consolation.

Zone 4 was the rockiest, so we held on for dear life while the driver hurtled through the jungle to get us back in time. I then understood why my veteran friend (she has been on 50 safaris and seen tigers on most of them) had insisted we eat early.

A campfire dinner, much laughter had us agreeing that the trip had been worthwhile even if we didn't spot the big cat. The morning safari saw us in our jeep, contemplating eating amrood while our guide did the formalities.

Suddenly our driver rushed back to the jeep, took it in reverse and we saw- tiger. Finally. Across Zone 1's boundary wall. 100 metres away. The same Zone 1 which I had cursed the previous two times I had been to Ranthambore.

After seeing a tiger, your appetite for nilgai, sambar and what have you just vanishes. You hunger to see more, closer. Zone 5's tigers were missing in action, but I was just happy I finally managed to catch a glimpse of those golden stripes.

T-24's a man eater- I think he has killed three so far. He didn't try to eat the last one. He's marked the road as his territory too. He often takes a walk at night to kill deer near Nahargarh Hotel, so you might bump into him even if you don't manage to book a safari :)

He looks dangerous, unlike the innocent deer we saw. Reminded me of a villain.